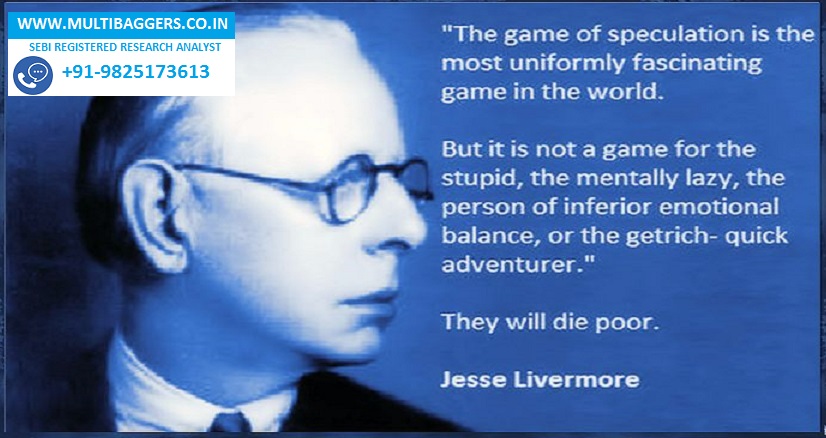 Jesse Livermore was one of the greatest traders who ever lived.

Livermore led a life surrounded by mistresses, scandals, money, and bankruptcy. He was a legendary trader who made millions during the crash of 1929.

But by 1934, Livermore would have used up the $100 million fortune he earned on the stock market just five years earlier. He declared a third bankruptcy, went through his second divorce, and committed suicide in 1940.

He has so many great quotes, but here are a few of my favorites:

1. The stock market is never obvious. It is designed to fool most of the people, most of the time.

2. Play the market only when all factors are in your favor. No person can play the market all the time and win. There are times when you should be completely out of the market, for emotional as well as economic reasons.

3. Do not use the words “Bullish” or “Bearish.” These words fix a firm market-direction in the mind for an extended period of time. Instead, use “Upward Trend” and “Downward Trend” when asked the direction you think the market is headed. Simply say: “The line of least resistance is either upward or downward at this time.”Remember, don’t fight the tape!

4. The game of speculation is the most uniformly fascinating game in the world. But it is not a game for the stupid, the mentally lazy, the person of inferior emotional balance, or the get-rich-quick adventurer. They will die poor.

5. The only thing to do when a person is wrong is to be right, by ceasing to be wrong. Cut your losses quickly, without hesitation. Don’t waste time. When a stock moves below a mental-stop, sell it immediately.

6. After spending many years in Wall street and after making and losing millions of dollars I want tell you this: It never was my thinking that made the big money for me. It always was my sitting.

Earn the big moves of stock market by long term investments in multibagger stocks and value pick stocks with SEBI registered Research analyst. It’s not difficult to earn big money in stock market if you choose the right stock on right time and keep the patience hold it even in huge profit.

7. Emotional control is the most essential factor in playing the market. Never lose control of your emotions when the market moves against you. Don’t get too confident over your wins or too despondent over your losses.

8. All through time, people have basically acted and reacted the same way in the market as a result of: greed, fear, ignorance, and hope. That is why the numerical formations and patterns recur on a constant basis.

10.There is nothing new on Wall Street or in stock speculation. What has happened in the past will happen again, and again, and again. This is because human nature does not change, and it is human emotion; solidly build into human nature, that always gets in the way of human intelligence. Of this I am sure.

Compound Interest Is The Eighth Wonder Of The World